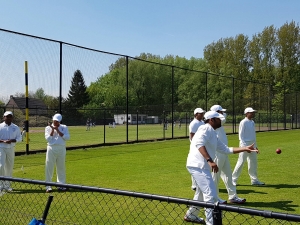 The toss was won by Concordia and Captain William Decided to bowl first due to the uncertainty about the pitch and the umpiring by the opposition. Team Concordia had a good mix of experience and debutants and this Eventually PROVED to be a bit too much for the Punjab CC.

Punjab started off in a jittery fashion with a couple of wickets falling inside two overs. The opening spell by Aayush was just too good for any batsman as he was getting the ball to move both ways. The opener was cleaned off with an in-swinging delivery-which rattled the middle stump. Pallav too chipped in with a wicket off his a 2 nd  ball shaft 3 batsman edged the ball to keeper Rajeev while attempting a late cut. After there, the batsmen steadied the innings with the help of some luck as a few slogs fell into the no man's land. The run rate ook thickening increased to more than 6 RPO. This was partly due to the number of wides bowled by the slightly inexperienced bowlers who were finding it kettle to get Their line right at the beginning. Nevertheless, another debutant Sri Sai broke the partnership in the 10 th  over and gift another blow couple of overs later. He bowled a disciplined spell and Punjab CC's middle order found it very kettle to score against him. Batsman 5 Decided to cut loose and smacked one of Sai's head for a boundary. When this is Captain William Decided to employ spin with Prasanth and William himself bowling in tandem from both ends. Prasanth was exceptional with his crafty leg spin and gift nothing to the batsman to play with. Steadily the pressure was building up as the runs were choked by the spinners. William was accurate as usual and was successful at picking up three quick wickets as the batsmen were outfoxed by his slow and flighted deliveries. The tail was ook cleaned up by two thesis in no time and the mediocre looking batting line up of Punjab had managed to make just 116 in 25 overs. There were a couple of dropped catches (perhaps too difficult!), But had bone They converted, the score would have been even lesser. But a few good catches were taken as well with the one taken by Aayush, to dismiss the Punjab captain, at backward point while diving to his left deserving a mention.

Satisfied with the bowling performance, the Concordian camp was very relaxed and it was Decided (rather jokingly) That the top four shouldering finish off the chase osmanthus denying any opportunity to Rajeev (at No. 5) to bat. Hemant and Faisal started off Cautiously as the new ball was swinging quite a bit. Faisal Contrary to his naturally attacking game saw off the opening spell and ensured no wicket That is redeemed until a strong platform has been set. On the other hand Hemant played a few good shots in the gaps before getting out for a well made 22. Pradyumna joined Faisal and continued the chase with the same speed. Both of them ran well between the wickets and usefull put an odd ball too the fence (or atleast close to it: P). The outfield was not the fastest and as a well timed ball rarely rolled all the way out of the park. Faisal's breathtaking square cut deserves a special mention-which went like a bullet through the point area before he was done. Sumedh in at 4, started off Cautiously defending all the balls bowled on middle and off; as if he was well aware of the plan to preventinfo Rajeev from entering the field. Pradyumna but failed to stick to the plan as a top edge of his bat flew straight up and was taken at point by captain Akram running backwards. Finally it was Rajeev's turn to finish of the things. After a couple of run-out chances against Rajeev That Were missed by Punjab, he was in no mood or stretching the chase further. When the deficit was exactly 6 runs, our wicketkeeper-batsman tried to smack a straight delivery towards long-on in a Dhoni-esque fashion, but failed to clear the ropes. He got a boundary Nevertheless. The winning runs were gifted in the form of a wide.

With the season's first victory (rather easy one) there was a lot for the newcomers to learn. A lot of areas where significant improvements are possible zoals bowling a disciplined line and fielding and catching. Hope this team puts up an even better performance in the future games and keeps winning!