The first match of new season for the 3-A team was an away game against Punjab CC in Rotterdam. The home team won the toss and elected to bat under cold and damp conditions. 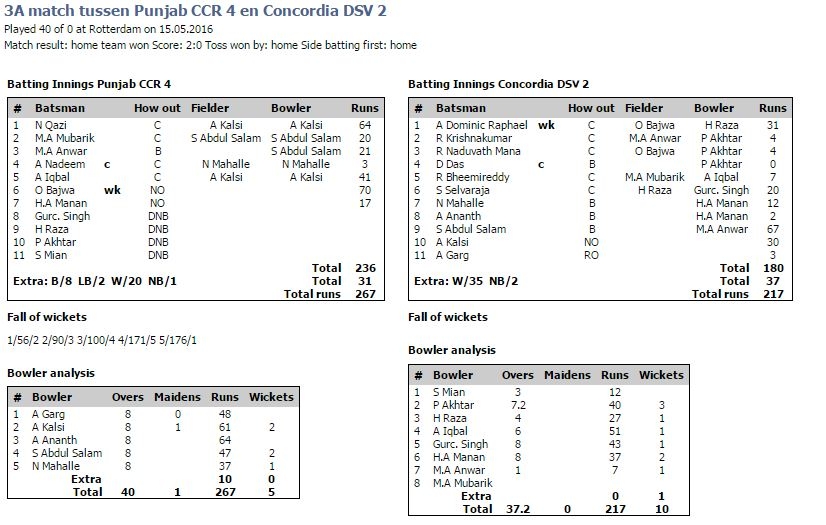 Punjab Innings
Concordia's opening bowling pair of Aman and Ayush started off the proceedings in a fairly tight mannermouse. The opening batting pair from Punjab were using the 'no lbw *' rule to the maximum. An odd boundary and few extras allowed them to keep the scoreboard ticking at close to six runs per over. Concordia bagged the first wicket with a bowling change, When Sajjad with his medium pace / spin caught the opening batsman of his own bowling. The opening pair had put on 56 runs for the first wicket. Sajjad had his second wicket batsman When no. 3 missed the length of the ball Entirely and was bowled. Nakul was brought` on to work his magic. He was rewarded for his effort When He had the no. 4 batsman caught and bowled in his first over . Aman got two wickets in two overs, as the run rate came below 6 rpo. It seemed like Punjab withtheir tail batting in the death overs, would finish with a score around 220-230 in Their 40 overs. But They had a different story to tell As They pounded every bowler in Their sight and the last eight overs cost more than 75 runs. Punjab finished with a score of 267 in Their stipulated 40 overs with two batsmen scoring half centuries.
* At least 4-5 legitimate and sure shot lbw appeals were rejected
Concordia innings
Concordia started the innings knowing That if it could stay alive for 40 overs, the match could be won. The opening pair of Arun and Balram Balram started Cautiously but had to depart after being caught in the slips. What followed was a 'Concordian collapse' as the whole top order was back in the pavilion by the 14th over with just 68 runs on board. Sasi tried to stick around to repair the damage but was losing partners at the other end. By the 24th over, the 9th wicket pair were at the crease and the score board Showed just 112 runs on board and it felt like it was time to pack up. But Sajjad and Aman had different plans. After getting the feel of the bowling, Sajjad burst out with a cascade of power packed shots. He scored three huge sixes and a flurry of well timed boundaries as the run rate crept up slowly and raised a glimmer of hope of an improbable victory. Aman on the other hand was playing the perfect foil to the brutal attack by Sajjad by nudging singles and rotating the strike as well as scoring himself the odd boundary. Hopes were raised Further When the score board Showed 70 odd runs required of the last six overs. The way Sajjad was seeing the ball, anything was possible. Unfortunately Sajjad got bowled trying to force another ball to the fence. The ninth wicket pair had put on a century partnership to steer the team close to victory. Ash Sajjad left the field (after scoring 67 runs), the team required 52 runs of three overs. Concordia lost its last wicket When Ayush was run out trying for a second run. Concordia folded out for 222 runs while chasing 268.
A disappointing start but with a lot of positives to take away.