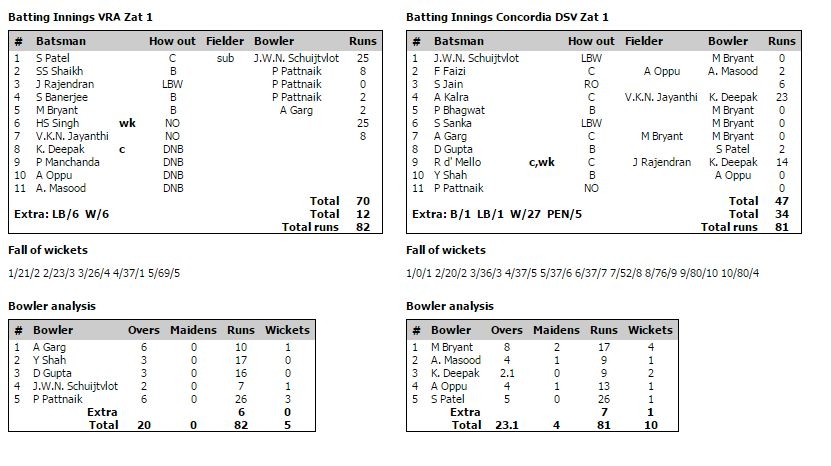 late in the afternoon in home of VRA. It was very clear and windy. As supposed the batting of Concordia trembled with the swing and starting with Jan Willem on the first ball, the wickets fell at regular intervals. At one stage the score of Concordia was 37/6 in 11 overs with four batsmen gone for a duck in the six. Aakarshith tried to mend the innings together along with Rupert but the stay was not long enough as the Concordia Innings ended at 82 with a total of 5 ducks and extras conceded by VRA(34) being the top scorer and aakarshit(23) the second highest.
Mike of VRA had best figures of 4/17 in 8 overs.
VRA innings:
As the score to defend was really less Concordia tried its best to find wickets early in the innings and Pallav got the first reward in the 9th over and continued on his spell to get two more wickets. Aayush as well after a consistent bowling attack got rewarded with a wicket in his sixth over. For a moment Concordia was back in the game after grabbing 4 wickets in quick succession making the opposition be at a rather helpless state at 36/4. But the match watch clinched away from Concordia as the VRA's Shreyan and Harpreet steadied their innings with a contribution of 25 each. Jan Willem provided another breakthrough with the first ball of his spell, but by that time everything was done and dusted for Concordia.
VRA finally won the match with 5 wickets
Pallav of Concordia was most among the wickets with 3/22
-Sasanka
Match Reports 2016 Overzicht
Tweet