Toss was won by Ajax and they chose to field first. It was expected to be an overcast day with intermittent showers. The field was damp. 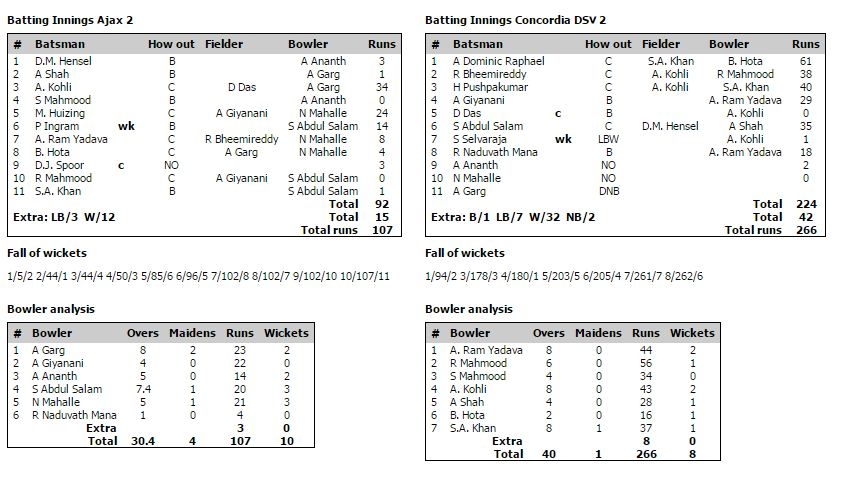 After losing the first match of the season, 3A team was looking for a solid start. Arun and Rajeev opened the innings steadily by rotating the strike and Rajeev hitting boundaries in between. With the long square boundaries, singles and doubles kept coming and their bowlers did not seem to trouble our openers. Rajeev pushed the gears from 10th over and was clearing the boundaries while Arun continued to play an anchoring role. The first wicket fell (99-1) after Rajeev (38 runs) mistimed the bowl and gave a catch to long on. With wickets in hand, Hari and Arun pushed the run rate to 7 rpo with excellent running between wickets. Shortly Arun got out (147-2, 22 overs) while hitting through mid-wicket for a well made 61. Ashim and Hari stabilized the innings with 1’s & 2’s and putting the bad balls to boundaries. In 29th over, an odd ball kept low as Hari (40 runs) was trying to hit a ‘jindra’ bowler towards deep midwicket and got caught (179-3). Three more wickets fell in next 5 overs with Ashim scoring handy 29 runs while Deep dada and Sasi returning back quickly as the score was 205-6(34 overs). Sajjad (35 off 17 balls) and Rakesh (18 off 8 balls) took the control of remaining overs and scored 60 runs in last 6 overs. Concordia ended at a solid score of 266 with the top 4 batsmen contributing most of the total and lower order accelerating at right time.

Aayush & Ashim started the bowling attack with Aayush striking in his second over to get one of their openers. Ajax’s in-form batsman Kohli, not that RCB guy, tried to steer the scoreboard as the runs were not coming from one end. Kohli was dropped three times, surprisingly two times by Hari in slips and once by Sajjad due to confusion in calling for catch. The fourth time captain cool held on to the catch at midwicket to get their only hope of chasing the huge score. The swing machine, Adi, almost got a hatrick as he bowled two guys and the score was 50-4 (11 overs).  Their next two batsmen tried to hold on the innings as they added another 40 odd runs in the next 12 overs. Nakul broke the partnership (91-5) as the batsman was bowled while playing the wrong line. The remaining wickets fell quickly in the next 5 overs. In spite of the damp field and wet ball, some good catches were taken by Ashim and Aayush, and Rajeev pulling off a superb catch at covers as he slightly misjudged the flight and caught with one hand while running backwards. Everyone (including Hari himself) was shocked to see Hari drop a sitter at long on. Sajjad and Nakul ended with 3 wickets each. Overall, the bowling was very economical with only 15 extras and Ajax all out for 107.

Few highlights from the match-