Menu
We played at the field of Excelsior as VCC too is struggling with fields now that football is still going on. Little consolation we are not the only ones with that problem. Unfortunately we were not allowed to play on the grass wicket of Excelsior as today they have THE local derby of their first team against HDVS. If you want to see a crowd for a regular cricket match in Holland, you have to go there. 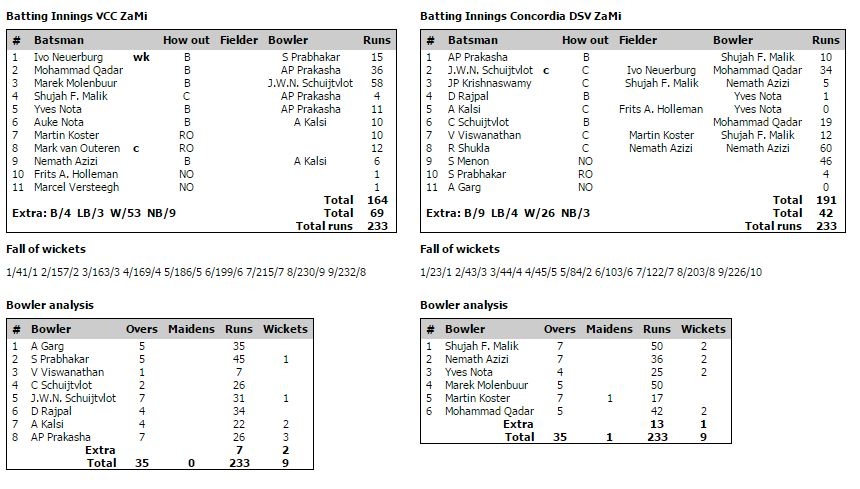 So we played on the second field which as a bit short boundaries to the sides and a par score has to be 200+ to feel any comfort. The start was good with Jan Willem winning the toss again (3 times in a row and no loss yet in this season!! 😂) and electing to bat first. After some discussion it was decided that Anand and Jan Willem would open the batting and to keep Ram and Srijit as 'guards' in the tail, coming in on 8 and 9.
Anand opened procedures with an attacking shot and playing aggressively, while Jan Willem played his traditional role as anchor man. Their bowling was reasonably accurate and we had agreed not to be to harsh on wide balls, so there were little extra's. Anand unfortunately misjudged a long ball on his stumps and got bowled for 10 quick runs. JP can in one down and started of positively but picked out a fielder with his second shot. Darwin had to face their slow bowler who bowls a deceiving off spin (I like him though ☺) and misjudged a flighted delivery getting bowled for 1. Aman had seen what happened and decided to play carefully resulting in a careful shot on a juicy legside long hop that was just within reach of their square leg fielder. His normal approach would surely have cleared the fielder. Jan Willem was playing carefully with some attacking shots in between, until he misjudged a new bowler giving a slight edge to the wicket keeper, after scoring 34 runs. He enjoyed batting with Casper for a while, as a proud father. Casper and Vinod continued with some good running, but were not really able to score boundaries. Vinod scored a nice 5 runs, being helped by a wild overthrow that ran for four. He eventually got out caught from a mistimed shot and Casper followed soon after misjudging a ball on his wicket from the left arm over bowler Martin. This brought our big guns Ram and Srijit together. Ram had an early scare of a close LBW, but after that decided not to mess around and play freely. Srijit played his natural attacking game with a huge 6 on his second ball. (Why he wanted to change that bat later on is a mystery) This partnership really accelerated the run rate and especially Ram was scoring at will. He eventually got out caught of a ball that could have been called No Ball, but with 60 runs behind his name we decided not to make a fuss. Srijit continued attacking the bowlers and Satish supported him well, specifically with running risky runs. Until there was a direct hit from the boundary that caught him short, but that was already in the 34th over. Mahipal came in as number 11 to support Srijit completing the overs. Srijit scored a good 46 not out and Mahipal remained 0 not out (not sure he got to face a ball). Our score was 233, not bad.
Lunch was nice in the lovely clubhouse of Excelsior cricket and refreshed we started proceedings with Mahipal and Satish. The openers of VCC clearly wanted to chase our total and attacked where possible, scoring regular boundaries. We also helped them quite a bit with the number of wides, though they were much stricter than we had been. After 10 overs they already had 81 on the board, including 23 wides. Satish took the wicket of their number 1, but their number 3 took over quite well. Vinod was unfortunate as they complained about his action and bowled only one over. Jan Willem tried a number of bowlers but no one was consistent enough to keep the score down and trouble the batsmen. He then turned to the proven concept in this class: Slow bowling. Jan Willem took the ball together with Anand, who started keeping, and that stopped the flow of runs a bit. When Anand took the wicket of their number two and Jan Willem shortly after that the wicket of their number 3, it looked like we would be able to win the game. But VCC didn't give up and ran really well, which caused two run outs though we missed a few chances as well due to a bit of panic in the field. Anand bowled really well and took 3 wickets for 26 runs and a few very close LBW calls. Aman took over from Jan Willem and bowled really well though the batsmen were running on nearly every ball. They both took a wicket, but in the last over of Aman they only needed 7 to win. They started with a 2 and a 1 on the first 2 balls but on the third ball he bowled number 9 and the last pair had to make 4 runs. Running blindly and with some luck with throws at the wicket that were just off target, they managed to run 3 but no more and it was a tie at 233.

An exciting game with a spectacular finish. We had some nice drinks to discuss the match and that ended a very good day of cricket.