After a week-long horoscope reading of what the weather gods had in store for us finally we are able to complete a game and win it convincingly. 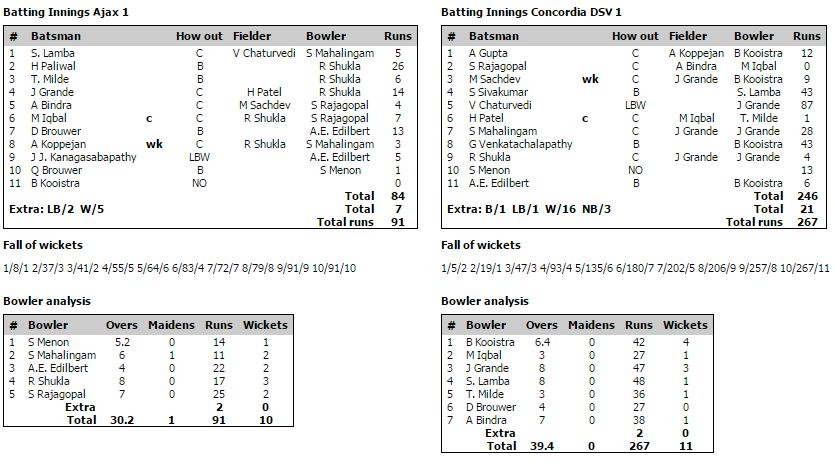 It all started on the right note by the great esteemed and most incisive captains decision at toss to call heads. The rest as they say is history. Batting first we got off to a flier with Sricharan managing to deposit a rank long hop straight to a fielder. Agam decided that a six or two are in order. He obliged with a few lusty blows but was sent back with a slightly late reaction from the umpire (around 2 balls delayed). Srisai walked in decided that all this pantering around with the ball is not the Concordia way. He smashed all that came his way for a well-made 43. Manu decided meanwhile to give Vikram a chance and offered a straightforward catch to midoff. Vikram took the chance with both hands and smashed his way to a brilliant 87 laced with 8 sixes. Sid was his usual fluent self with slight hiccups was unlucky when one of the hiccups caused the ball to sit up and was caught and bowled. Oh in between yours truly walked in and out without troubling the scorers much. Our "rearguard" started with Girish and Vicky and then with Girish and Srijith making more than useful contributions and the total crossed 250. Girish eventually made an important 43. Finally, when the dust was settled we made 267 – a handy score one would say.

Bowling started on the right note with the first ball smashed for 4 (This is a good luck charm – very potent as you will learn reading below). This was however one of the very few balls struck for 4. Sid got their main batsman out in the second over itself courtesy a diving catch from Vikram (all the training works at least for one person). From then on Sri and Sid (indeed all the bowlers) kept a stranglehold on the scoring at no point in the chase the run rate seemed to have crossed 3. Meanwhile, the required rate was climbing ever so quickly as Ram was kind enough to remind the batsman regularly (every ball). After 4 overs each of tight bowling Sid and Srijith were given some well deserved rest and Antony and Ram were brought in. Shukla struck gold in the second over itself to get rid of their not so dangerous batsman. Meanwhile Sricharan replaced Antony (Antony is not fast enough – we needed fast overs) and together with Shukla brought the game to a standstill except for a few wickets here and there. By the time both were done with their overs (Sricharan bowled 7 I think and Shukla 8 straight overs) the tail was ready to be wiped out – this was duly done by Antony Sid and Srijith. Eventually Antony and Sid got 2 wickets a piece, Shukla got 3, Sricharan 2 and Srijith 1 and Ajaxs innings folded for 91. A huge win for us and lots of positives from the match.

Vikrams 4 sixes in a row – this came in a partnership of 42 with yours truly. I made 1.

Extra Economic Bowling by all the bowlers (only 5 needed today)