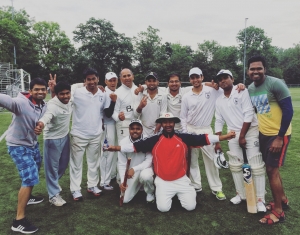 The toss was won by Dada this time and this year, the luck has been in favour of Concordia mostly. It was a nice day for cricket, the moderate temperatures and very less rain forecasted for the day. Concordia had 3 new entrants in the 3A side compared to the last team, namely Balram, Pallav and Prashant. A special thanks to Anand for fielding in for one over for Ashim, who will writing this report is already feeling guilty.

Pallav and Hari started off with the pace attack with Pallav swinging the ball in and Hari putting in his skiddy bouncers to the batsmen. More than once, Hari did get the batsmen on the backfoot lofting the ball in air but in no man's land. Pallav got I. Chaudary with his inswinging delivery middle stump knocked out. The other opening batsmen surprising also Din, tried to defend for some overs but didn't bother much scores as Pallav decided to bowl an odd out swinging goodlength. Din managed to edge it and Arun with his completely stretched body in mid air was able to grab it comfortably at first slip. At 36/2 now, Punjab decided to play defensively which resulted in runrate of 3.5 rpo until 15th over. Hereafter, there were some bowling changes and some cathces were dropped of Hari's, Prashanth, Ashim and Particularly Sajjad's bowling, but the the run-rate remained low until 25 overs (runs 125), . Sajjad finally got rewarded as Prashanth held onto one of them. After this, Sajjad tried to get their aggressive batsmen Asif Khan, and was unsuccesful 3 times in an over due to fielding incompetences of Concordia. Asif lost his partners due to some splendid bowling by Sajjad and Prashant in the middle overs. In the last 8 overs, fast bowlers Hari and Pallav were brought into the attack and Pallav managed to take two more wickets where Rakesh took a splendid catch at point, that of Asif Khan and Punjab really didn't have matter anymore. The other 4-5 overs were bowled so tighltly that most of the runs scored were from the keeper's gloves. Thus, ended Punjab's batting with 218/8 in 40 overs. The pick of the bowlers was Pallav with his 8 overs 30/4wkts haul. The downside was that a couple of sitters were dropped by Arun, Rakesh, Balram and Sasi.
Concordia's batting started with the seasoned and marinated pair of Arun and Bahuballi, Reddy. Reddy fell early to a quick inswinging bouncer to the square leg fielder. Hari, batting at number three looked solid with his strokes and had started off well, only to hit a fulltoss ball straight to the cover fielder. At this stage, Concordia were mere 20/2 in 6 overs. Prashanth was sent in at number four and he took his time to get his eye in, while on the other end Arun edged the ball to the keeper. Ashim came in next and started of well but soon got a leaving edge off a slow fulltoss trying to nudge on the leg-side straight to covers again. Rakesh and Prashanth thereafter maintained cool heads and kept scoring singles and the odd boundaries were helping. At this stage, Punjab was waiting for Prashant and Rakesh to make mistakes and allowed singles to be flown but had fielders deep to protect the boundaries. Slowly and steadily, a 100 run partnership was built between the two and Punjab started showing worry. At 25 overs, Concordia was about 110/4 coming from 41/4. Also, at the same time, one of their efficient spinners had ended their spell and medium fast bowlers started their spells. In between Rakesh hit a massive six and two boundaries of  one over from Asif Khan who had troubled the opening bowlers with his pacy bouncers. Additionally, in the same over, the Umpire stopped him twice from bowling due to certain events on the ground. This further added to the frustration of the bowler, such that he was swearing all the time,losing his rhythm as well. Runs were flowing with boundaries in each over and the rpo was maintained at 7 rpo during these overs  such that 34 runs of 30 balls were needed in the end. The captain Z. Khan brought himself in a similar fashion as Tiggy does, considering he would get a Jindra wicket. He was almost succesful, when Rakesh hit a two bounce ball in air to silly mid-on and the catch was dropped. But at this stage, it didn't matter as Prashant and Rakesh had done their job to bring Concordia close to victory. Rakesh got run-out closely after scoring a well-deserved and appreciated 60 runs. Sajjad came in to make the innings end like MS Dhoni, but Prashanth never gave him the chance to do so and scored more runs to his name. He scored 107 runs and took Concordia to victory.
At the end of the day, Pallav, Prashanth and Rakesh are the players of the day and they will leave good memories in my mind for the match. The day ended with Beer, KFC Chicken , courtesy Dada and Sajjad. The match allowed some confidence for the upper order batsmen that there is depth in the batting line-up and there are enough performers in the bottom half of the line. Let's take Concordia 3A to the top of the league. I wish the same for other teams as well.
-Ashim
Match Reports 2016 Overzicht
Tweet