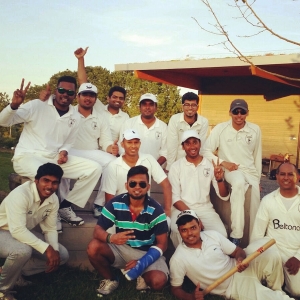 Openers lay solid foundation in easy Concordia victory.
A 74 run opening stand between Arun and Rajeev helped Concordia post a decent total of 223 for the loss of 6 wickets on a sluggish wicket and a slow outfield after being put to bat by Sparta. In reply, an over defensive Sparta batting line-up could only manage 191 runs for the loss of 9 wickets in their allotted 40 overs, aided by a few lusty yet mistimed hits in the second half of their innings although it was too late by then.
L. Singh, the top-scorer for Sparta batted for 34 overs only to make 43 in the end. After Pallav got one of the openers for a duck in the first over, L. Singh and D. Umal started blocking each and every single ball making the game a dull and drowsy affair and adding tremendous pressure on the batsmen who were to follow. The second wicket fell in the 15th over, courtesy of some horrible running between the wickets and the scorecard read 45 for 2 with Pallav and Ashim bowling tight spells and drying up the runs completely. H. Pawa came in to bat next and tried to up the scoring rate with a few good hits off the bowling of Ballu and Prashanth. Rajeev offered him a reprieve when he dropped a regulation high catch off the bowling of Adi, although it did not matter much as Adi cleaned him up with a beauty in his next over. Adi finished his spell with figures of 2 for 30 after some disciplined bowling. The lower middle order never got going and continued struggling against some quality spin bowling from Prashanth and Nakul. Nakul was rewarded with 2 wickets, which included the prized wicket of L. Singh in the 34th over, who looked like he had been trying to get out since over number 2. The innings also involved a couple of good run-outs from the Concordia boys and Rajeevs keeping was top-notch apart from the one missed opportunity. One-handed Sajju, who was fielding for Hari, made a valiant effort in the deep to save a boundary which was another moment of brilliance on the field. Dada finished proceedings after bowling the 40th over, giving Concordia an easy victory.
Earlier in the day, Concordia was put into bat after losing the toss. Arun and Rajeev started steadily, rotating strike and picking the odd boundary. Although the runs were not flowing because of a sluggish outfield, they did not lose their wicket and kept accelerating at a good pace. Rajeev was the first man to go for a well-made 31 after being adjudged LBW. Hari at number 3 started positively, but was retired hurt after he was struck by a nasty 140 kmph bouncer got a headache. Prashanth and Arun upped the momentum as runs started to flow a bit more easily. Arun reach his half-century but got out immediately after reaching his milestone. Ashim found it difficult initially as the balls were keeping low and were not coming to the bat easily. Prashanth, in the other end, tried to further improve the scoring rate but was bowled for 21 after going for a wild slog to a straight ball. Nakul and Ashim took a few 1s and 2s adding vital runs to the total and eventually getting out towards the end of the innings. Dada at number 7 got a wild round of applause after getting off the mark but found the going difficult as the balls started keeping further low. He got out for 10 off the last ball of the innings, with Ballu remaining unbeaten on 9 after a few innovative shots in the final overs. L. Singh was the pick of the bowlers and finished with 3 wickets in his 8 overs. Concordia eventually reached 223 with the extras column top-scoring with more than 60.
At the end of the day, a solid all-round performance led by the opening batsmen gave Concordia an easy victory, their third in a row.
- Prashanth
Match Reports 2016 Overzicht
Tweet