Extremely difficult to write a report for a match that we lost. The weather gods greeted us with some heavy rains to delay the match by half an hour and as a result it was a 36 over a side game as opposed to 40 overs !! 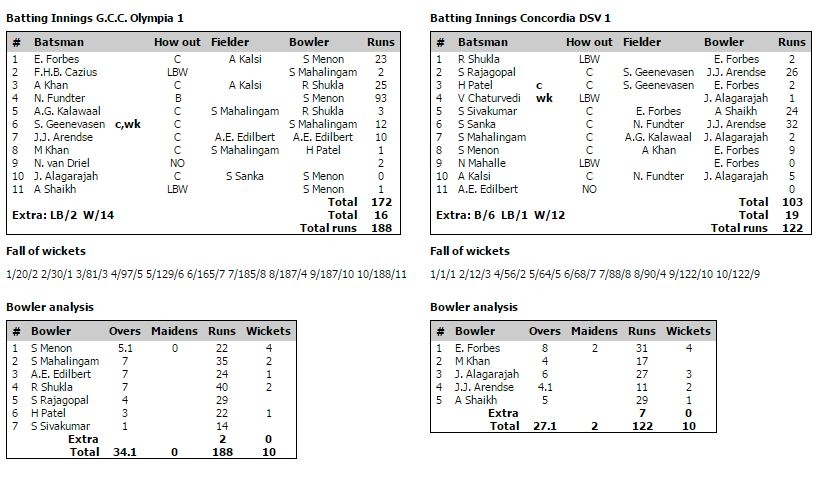 2 last minute changes were made to the team; Nakul replaced Manu (freak injury day before the game) and we had the new boy Sasanka playing instead of Akshay. Again the toss of coin didnt go in our favor and Tiggy lost his 3rd toss on the bounce. Maybe we need another coin for the next toss :) We did our pre-match warm up drills and were up and ready.

Srijith and Sid started proceedings and unlike the previous two games, there seemed to be a sense of urgency shown by one of the openers in this game. He was hitting anything short or too full and was especially severe on Sid, hitting him for 3 fours in his first over. Sri and Sid took their customary first spell wickets (one apiece) but this innings was different as the opposition was going at more than 6 an over at the end of the 8 overs, unlike the previous two games. Antony and Shukla replaced the new ball bowlers but still despite getting beaten here and there their batsmen, Khan and Fundter were scoring boundaries at will. Shukla took care of Khan, who was trying to hit one 6 too many and got caught at long on. Their incumbent batsman also got out to the guile of Shukla, Aman taking a relatively easy catch at cover (as compared to the blinder he took off the opener). Whereas at the other end, Fundter was playing some beautiful shots without many risks and was doing it all alone. Sid was brought back for his return spell to get his wicket but instead got rid of the captain, who offered a simple take to the wicket keeper. At the other end Sricharan was introduced to change things up a bit and it almost led to immediate success but for Aman's butterfingers (he took 2 catches, and dropped 2) and to make things worse it was off their main batsman who went to score 93. Big miss, but from this point onward shoulders were dropping, misfields galore, at least 3 boundaries were let off when it should have been 3 singles or at the max 2s (wont take names, the people know who are being referred to here) Srijith came back for his return spell and polished off Fundter for 93, and also polished off the tail alongwith Antony who plucked a blinder of a return catch to get rid off the final few batsmen for not so many.

At the half-way mark, we knew we had our work cut out, and one of our top guns had to score a big one with the others rallying around him, or do it like we did in the last game, small useful partnerships !

We didnt get off to a good start, with Shukla (our makeshift opener) getting out Llbw to their opening bowler,Forbes, who apparently was bowling some good outswinging deliveries. The captain was at the crease sooner than he expected, but got out to a bumper which shot off took his glove and the keeper completed the formalities and we were 2 down for nothing (12 for the loss of 2 wickets). Vikram, who has scored 50s in the first two games got in, solidly defended his first two balls, felt assuring to us sitting outside, but Forbes soon got his 3rd wicket and that too the big one of Vikram, with some assistance by the umpire who gave a stinker of an lbw but that will happen with neutral umpires. The next man in was Srisai, and what transpired in Forbes 4th over was fascinating yet scary for the people in the 'dressing room'. Forbes went for 23 runs in that over, with some serious words being said by him and the replies were just boundaries of the bat off the 2 Sris, Charan and Sai. But it was G.C.C that had the final laugh as in the next over Sricharan got out to a long hop, a ball that he would have hit 9 times out of 10. Sirhcaran got out to an entertaining 26. Next man in was Sasanka, and it was upto this pair to bat out a few overs as it was not even 10 overs yet in the chase and we were 4 down !! Srisai went after a ball in the next over and edged it to the keeper (the first of the rash shots that shouldnt have been played considering the game situation). In came Sid at 7, broke Agam's bat with his first shot :P and also got out to a horrible shot, soft dismissal, caught at mid on (second of the rash shots). Srijith was next to come in and he gave sasanka some company and runs were coming at a decent pace but we were lagging behind so much (in terms of wickets) that it was simply too much for Sri and Sasanka to win it for us. Sri soon got out to their spin bowler, trying to pull a short ball, getting a top edge and getting caught at short midwicket. Nakul was the next man in and got out to Forbes lbw to give him his 4th wicket. Kalsi walked in at 10 with his mandate clear to just bat out 36 overs and give Sasanka company, who  was batting patiently at the other end, just waiting for the bad ball and dispatching it. Kalsi also got greedy sooner than we expected seeing a short ball and giving some catch practice to their fielder at covers. Antony was the last man in and the equation was 9 overs 70 to win and he said that he is just going to go out and have some fun, but Sasanka got a leading edge trying to clear mid on and got pouched safely by their star of the day, Fundter. Fairly enough he got the chance to close out the game :)

Highlights
Play to your strengths, focus one game at a time, stop using the word champion too soon (it is just 3 games into the season),  appeal in unison, put a price on your wicket, stay focused, and we hope to be back to winning ways, beginning with QuiVive coming Sunday !!
- Sid
Match Reports 2016 Overzicht
Tweet