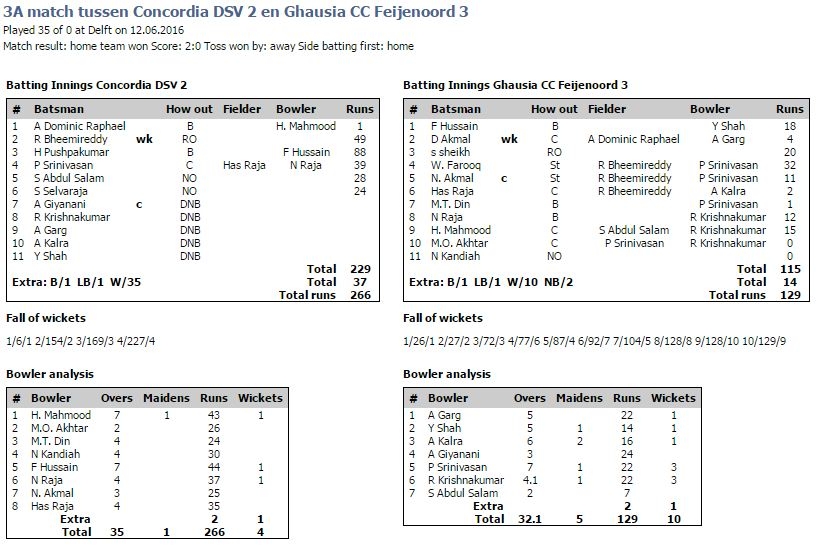 A solid 148 runs 2nd wicket partnership between Hari and Rajeev helped Concordia post a mammoth total of 266 runs for the loss of 4 wickets on a good wicket and a fast outfield. In reply, the demotivated and tired (as most of the Gausia players were fasting for Ramzan) Gausia batting line-up could only manage 129 all out in 32.1 overs.
Concordia, playing under a new captain (Ashim), was put into bat after losing the toss. The start didn't go well with Arun getting clean bowled by Mahmood in the 2nd over of the match. Hari at number 3 started positively and started thrashing Gausia bowlers to all parts of the ground and was well supported by Rajeev at the other end. Both of them scored at more than run a ball and put on an impressive partnership of 148 before Rajeev got run out for 49. The partnership was marked with Hari's cover drives, Rajeev's late cuts and horrible fielding placements and dropped catches from Gausia. Prashanth at number 4 continued where Rajeev left, with his ever-impressive batting display. On the other end, Hari too lost his concentration and got bowled soon after for a well made 88. After Hari's wicket, Sajju made sure to see through the innings and well supported Prashanth with quick singles and excellent runnings between the wickets. Prasanth in an effort to to further accelerate got out on a wild slog in 31st over. Finally the innings ended with a score of 266 and some lusty blows by Sasi (which also included a SIX!).
After the satisfying lunch, Concordia started the opening bowling with 2 left-arm medium pacers, Aayush and Yash. Both started well, Aayush in swinging and Yash taking the ball away from the right handers. Gausia lost their 1st wicket in form of Hussain, when Yash clean bowled him with fast out swinger. The very next over, Aayush too removed the second opener. After the 2 wickets, Gausia showed resistance with some cautious batting by Sheikh and Waqas and took the score to 72-2 in 15 overs. Finally, their resistance came to an end with Sheikh's run out, courtesy of breathtaking fielding effort from Ballu at short-midwicket. At no-point after this wicket, Gausia seemed anywhere near reaching the target and wickets started tumbling at regular intervals, to their misery Prashanth bowled one of the "best" leg-spin spells for Concordia. He took 3 wickets which included 2 stumpings (credit to Rajeev too!). At the latter end of Gausia innings, Ashim introduced Ballu from one end and to everyone pleasant surprise, Ballu bowled extremely good and ended up picking last 3 wickets.
At the end of the day, a solid all-round performance with both bat and ball gave Concordia a thumping victory, their 4th in a row.
--Aayush
Match Reports 2016 Overzicht
Tweet