Hari fires again!  Concordia chased down a formidable target of 217

Concordia chased down a formidable target of 217 in the 40 over away match played against HBS3 at Den Haag, on the shoulders of the in-form batsman Hari (83*). The chase had all the ingredients of an exciting cricket match with some good quality bowling and batting, runouts, sharp catches and an adrenaline rushing on-field spat/drama (‘Ram’ayan) which continued after the match as well. 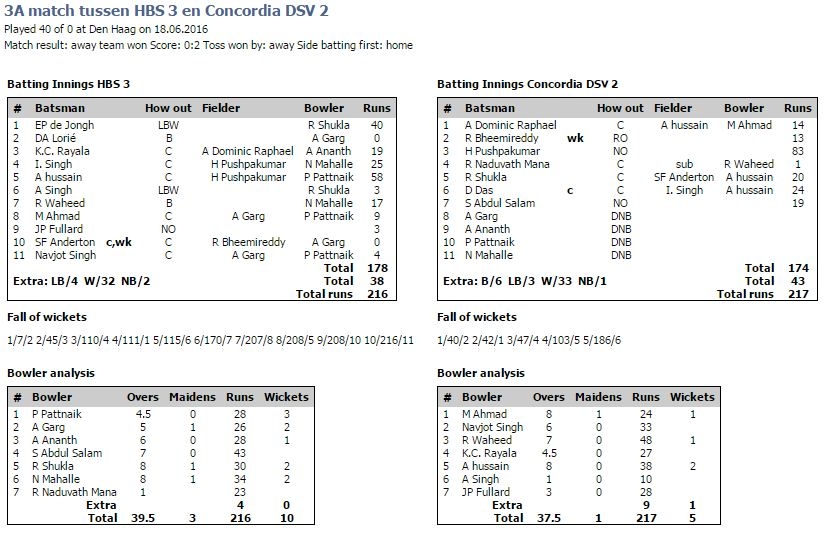 The chase started off with the reliable opening pair of Arun and Reddy cautiously seeing off some good swing bowling from the HBS opening bowlers. The pair skilfully handled the bowling while keeping the scoreboard tick. By the 10thover, the pair had scored 40 runs and looked good to build upon further. But unfortunately, the partnership ended abruptly with Reddy getting run out owing to some poor calling and running between the two of them. In the span of next two overs and 7 runs, Concordia lost Arun and Rakesh to two sharp catches that complimented the swing bowling.With the scoreboard displaying 47/3 in 12 overs, it was up to the new pair of Hari and (Ram)Shukla (who replaced the regular leg spinner Prashant) to build a partnership to prevent any further damage. The pair watchfully played the overs, rotated the strike and managed to score few boundaries to take Concordia to 100 by the end of 20thover.(In between the cruise to the above mentioned 100 mark, an on field spat brought the Ravan out of our ever affable Ram. The incident started off with the HBS players showing their disappointment on the batsman not walking, after having seemingly edged the ball to the keeper. Things got worse, when one of the older/senior members of the HBS team initiated personal verbal attack on the batsman. This led to the batsman marching towards this fielder in the cover, and the interventions of other players and the umpires deemed necessary to pacify the situation)

The exchange of words (which lasted few overs) temporarily concluded with Shukla walking after having edged the ball to the keeper. The fancy electronic scoreboard in the ground now flashed 103/4 at the end of 22nd over. At this crucial juncture of the match, in walks our captain Dada to support Hari who was looking calm and confident (as always) at 56*. The pair played responsibly to the situation, running well and scoring the odd boundaries to take the game away from HBS with their 83 runs partnership. By the time Dada departed after an important and well-made 24, Concordia needed only 30 runs from the remaining 7 overs, which Hari and Sajjad -the finisher- sealed off in style.

Speaking of style, during the unfolding of all the above mentioned events, Hari was carving out yet another poetic innings of his with the elegant cover drives, and his trademark back-foot punches. Having walked in at over number 10 of the innings, Hari was the only batsman who seemed to have been least troubled with the swing bowlers of HBS. The chanceless innings of 83* was composed of 10 boundaries, and an aesthetically pleasing giant six over the long on. He was, undoubtedly, the Concordian of the day.

Earlier, in the first half of the afternoon, Dada had won the toss and send in HBS to bat. The opening bowlers responded well with Ayush sending back one of their openers in his very first over. The first change bowler Adithya came in to break a threatening second wicket partnership, thanks to a good catch by Arun, and the score was 45/2 at the end of 10 overs.Further, it was up to the spin duo of Shukla and Nakul to consolidate the decent start provided by the fast bowlers. The next pair of batsmen were looking comfortable and were marching ahead with a 50 run partnership, but Nakul broke the partnership with a finely flighted delivery that was mishit to the covers. The spin duo bowled well with good flight and spin, and controlling the flow of runs by picking up wickets at regular intervals. Both Nakul and Shukla took 2 wickets each, and ended their spells with the figures of 2/34 and 2/30 respectively, and the HBS scorecard showed 115/5 in 27 overs.But from then on one of their batsmen, A Singh, took control of the proceedings by attacking the bowling of Concordia and scoring 60 runs in the next 5 overs. So, Pallav was brought back into the attack, and he broke the partnership with the aid of a good high catch taken by Aayush in the deep. Further, Pallav and Ayush finished off the tail ending with the figures of 3/28 and 2/26 respectively. The extras column of Concordia shows a matter of concern with 32 wides being bowled out of the 38 extras conceded. But Reddy was once again clinical behind the stumps, conceding no byes and making some ‘Bahubali dives’ to save the extravagant wides.

-        The best ground facilities (pavilion, dressing room and the electronic scoreboard) so far, and a delicious lunch as well.

-         The exchange of words and fights can tense the atmosphere at that point of time. But these moments also bring in those memories that makes us smile when we look back.  For instance, check out this gem (quote of the day) which happened post-match off the field:

The ‘pagla’ fielder to Shukla – ‘Are you proud of yourself’?