After Saturday’s win over Groen en Wit, the Concordians preparation for the next match was already started.  This means that alcholic guys of our team have decided not to drink more than 2 beer, which shows a commitment of the team. Of course, non-alcholic guys have also decided not to drink more than 2 chocomelk or coco cola. The reason is still unknown to the author :p.

Anyways, on a serious note, Concordians were focussed and well prepared for the match. Tiggy, the captain of OVB has decided to change the coin, in order to win the toss which he has not able to do so for a long time. Although, each of the team member’s were quite confident of losing the toss, and eventually we lost the toss. Fortunately, VRA team has decided to field first and luckily we got what we wanted.  We were happy to bat, as it seems batting pitch with no grass on the pitch :p. The Concordians were well prepared and focussed. The idea was to put a good score on the board. 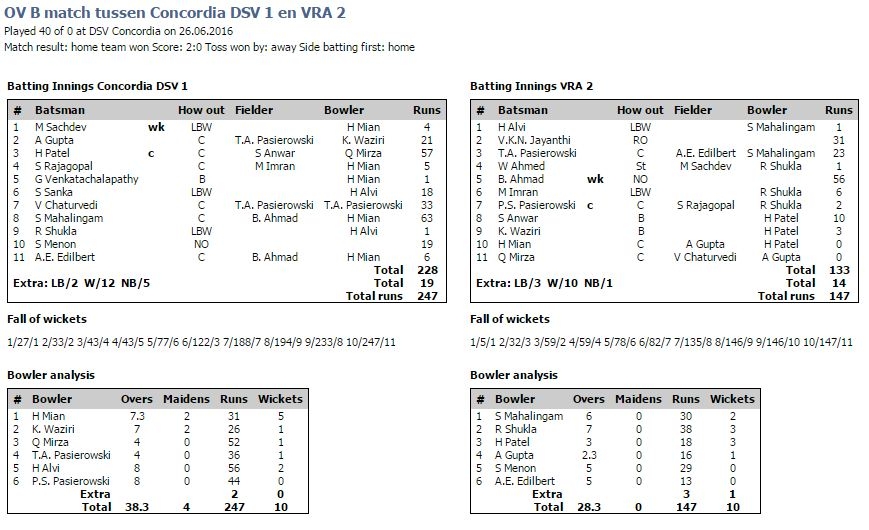 Agam (Shewag) and Manu opened the innings. H Mian, a left arm bowler, has shown his skill level by swinging the red ball with good pace (run up was from the boundary). After two balls, Agam smashed him for marvelous six over deep mid wicket. This shot created a buzz among the visitor’s team, as according to their keeper, nobody has smashed him in his first over. Agam with quirky smile, said there is always a first time:p . Agam gave a quick start , and lost his wicket to Waziri. The score was 27 for 1 after 4 overs. This brings Tiggy into the center, along with Manu. After six more runs, Manu was judged lbw, the score was 33 for 2. Sricharan started his innings with a beautiful cover drive to H Mian. At last, Mian has taken well planned wicket of Sricharan. This has created an immense pressure on the batting side. Girish has joined Tiggy on the crease. Girish, on inswinging ball, decided to leave it, resulted into a shattering of stumps. At this time, the home team were struggling, 43 for 4 after 12 overs. Tiggy and S. Sanka, had shown a good batting skills, played with staright bat, scoring odd boundaries. They made a good partnership of 34 runs. Sanka, got out on his individual score of 18, judged lbw to H Alvi. This brings our inform batsman Vikram into the crease. Vikram and Tiggy played with determination and make sure of punishing the bad balls to the boundaries. In the mean time, Tiggy made his maiden half century of the season with some beautiful shots which includes flick, straight drive etc. Tiggy miscued a short ball to a leg spinner, resulted his key wicket. At this time, the score was 122 for 6. Sid, accompanied Vikram on the crucial juncture of the match. One of more wicket, could have dampened the home team innings. Sid and Vikram made sure not only to build a partnership, but hammered the bowlers all around the ground. Sid, in particular was an aggressor, who scored a hatrick of sixes to the spinner. His straight six was a massive, the ball is still not found till date. On the other hand, Vikram also decided to clear a rope, with a two huge massive sixes. Overall, it is important to mention, the visitor’s team had dropped too many important catches. At last, the bowler, took a blinder catch to get rid of a big wicket of Vikram. Soon after Vikram, Ram couldn’t stay longer and got out lbw to H. Alvi. Still, a good partnership was required to reach 240+, which was provided by Sid and Srijith. Srijith played sensibly and allowed Sid to score freely. Sid got out on a well made score of 63 runs. After Sid wicket, Srijith has scored a massive straight six to their best bowler- H. Mian.Antony, the guru baba of the home team, has played a beautiful straight shot over the bowler for a boundary. Antony got out to H. Mian, the final score was 247.  After 43 for 4, posting a score of 247 was a commendable job by the home team.

Srijith and Sid started the proceeding with a new ball. The pressure of chasing 247 runs was quite evident on the batsman. Srijith outswingers and Sid raw pace, was not helping  the vistor’s cause. Sid struck with a first wicket of H. Alvi who was judged lbw. After early wicket, Jaynathi and Pasierowoski has decided to play aggressively. Pasierworski, in particular, was annoyed by the positive sledging by the home team. He scored a few boundaries, but eventually, Sid got him out with a good pacy ball.  They were 33 for for 2. After a fiery spell of Srijith and Sid, as a first change, Antony was brought into the attack. Antony kept the proceedings tight. Shukla, on the other hand, suffering from back injury (similar to Sachin Tendulkar one’s hehe  :p), has started well. W Ahmed, step out to hit him for a six, unfortunately he couldn’t connect, resulted into outstanding stumping by Manu (Abhi bhi baat hai ;). Shukla has taken another two quick wickets which made things more difficult for the chasing side. It is important to mention, Sricharan, took an unbelievable catch on the boundary (best of the match). On the other hand, Antony bowled a very tight spell, 5 overs 13 runs, almost gave nothing. Shukla in his seventh over got hammered by Ahmad, resulting  Agam and Tiggy arrival as a bowling change.

Tiggy has started well and took three crucial wickets in his three overs. One of his ball, turned, and shattered the middle stump of a batsman. Agam who was creating chances on almost every ball, finally got his first wicket. Finally, it was a comprehensive victory for the home side. This means Concordians are now on the top of the table along with HBS.

The next match is against HBS on 3rd July, which will be important for both the team. Stay tuned for the updates.

4.       Good all round bowling and good intensity by the fielders. Well made 56 run knock by Ahmad- Visitor team.

5.       Outstanding stumping by Manu and stunning catch by Sricharan.

7.       Concordian Supporters- A big thanks from the Cricket team, it means a lot to them.