The match scheduled between Groen & Wit(away game but played at Concordia) was cancelled due to rain earlier. On the rescheduled day too, the weather was very gloomy with a forecast of occasional rainfall. Groen & Wit, who won the toss, decided to bat first. Their previous victory in a T20 match in lieu of the cancelled league game was lingering in everyone’s mind and we were expecting a similar kind of batting from the Groen & Wit batsmen. 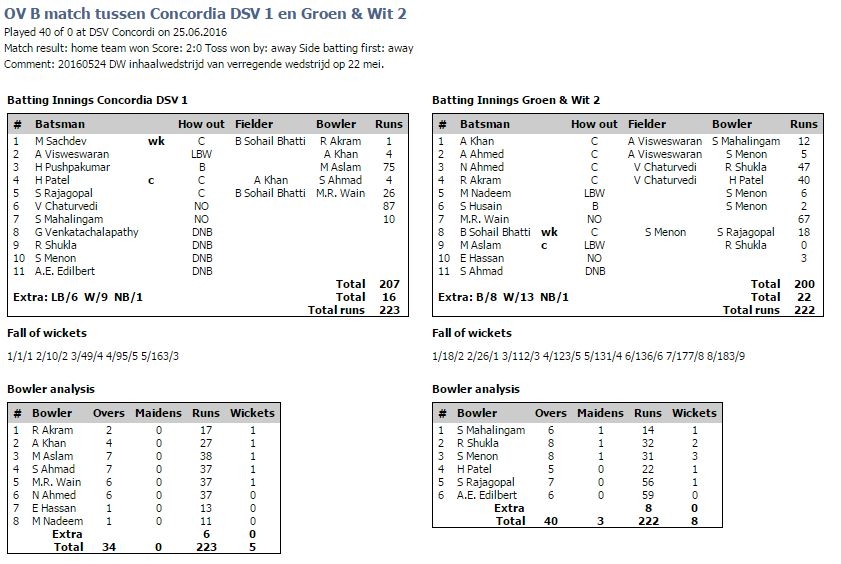 Our pace spearheads started off the proceedings with some disciplined bowling and accuracy, giving away nothing to the opening batsmen. Srijith’s first spell lasted 3 overs and the ball was given to Shukla at a very early stage. Shukla struck in his very first over picking the wicket of one of the openers and Sidharth, exceptional as always, bowled 2 maidens and picked the wicket of the other opening batsman in his first spell. Shukla was keeping up the pressure with a maiden over on the other end and the score card read 33-2 at the end of 11 overs after Sidharth’s first spell. Antony took over from Sid and started off with conceding a boundary. Groen & Wit’s batsman N Ahmad found it easy to flick and pull his deliveries which were straying on the middle-leg stump line. On the other end, Sricharan replaced Shukla, started off well but ended up conceding runs in his second over. N Ahmad & R Akram capitalized this phase of the game and managed a quick surge in their score (106-2 in 18 overs) with Antony conceding 38 runs in his 4 overs. Srijith came back for his second spell in place of Sricharan and picked up the wicket of N Ahmad in the 19th over. The captain brought himself into the attack and kept things tight from the other end. Meanwhile Srijith claimed his 2nd and 3rd wicket, dismissing batsmen Nadeem & Hussain for paltry scores. Tiggy played the second fiddle in pulling back the scoring rate, got R Akram caught behind and it was 159-6 at the end of 30 overs. At this point, Sricharan and Shukla were brought in to bowl from both ends. Both the spinners showed their craft with sharp turns and good variations. As Shukla’s quota of 8 overs ended, Antony was brought back to finish off the innings only to be thrashed for consecutive boundaries and sixes in the final over by M.R. Wain. The target was 223, which could have been easily 40 runs lesser.

Since our very own Sehwag, Agam, couldn’t make it to the game on a Saturday, Manu teamed up with Akshay to start off the chase. Manu was quick to get off the mark while Akshay played very cautiously and struck a beautiful boundary. In the 3rd over, Manu tried to pull R Akram’s delivery going down the leg side, which managed to brush his gloves. Manu walked off the field showing true sportsmanship when the umpire was still doubtful about the wicket. The in-form batsman of the season, Hari walked in next as our captain decided to sacrifice his no. 3 spot. Akshay was adjudged LBW soon, which saw our captain on the crease. Hari and Patel, built a partnership of 39 runs with Patel remaining as a spectator at the other end for the most part, seeing Hari execute some immaculately timed straight drives off the bowlers at both ends. The prodigy of Groen & Wit, 12 years old S Ahmad was brought into the attack soon. A Khan who managed to drop Hari on 2 occasions earlier, managed to catch one to see Tiggy off the field, fetching S Ahmad his first wicket of the season. Then came in the cutest thing on the field (not the 12 year old boy) dragging his bat along to join Hari in the middle. Hari and Sricharan put on a 46 run partnership with some picture perfect shots for 6s and 4s. It seemed to go well, till Sricharan, with a double minded attempt for a shot, edged one to the wicketkeeper. This brought in the run machine Vikram to the crease and needless to say what would have happened with spinners and not so quick bowlers bowling on both ends. Vikram showed no mercy punishing almost every ball for 4s and 6s with a few dots in between. Hari continued building up the score, at his elegant best with 8x4s and a 6 providing good support. With 44 runs required to win, there was a bizarre appeal for Hari’s wicket with every Groen & Wit player appealing for God-knows-what  reasons. The confused umpires discussed amongst themselves and adjudged Hari got bowled off M Aslam’s delivery since the bails were off. This spurred a bit of confusion and chaos amongst us Concordians because we witnessed the wicketkeeper knocking off  the bails with his gloves. However, Hari walked off and Sidharth went in to see Vikram continuing his carnage and end up with 87 runs off 43 balls, which included 12x4s and 3x6s. Concordians pulled off a convincing win at the end, thanks to Vikram’s and Hari’s poles-apart-in-nature knocks .