“Their openers aren't reliable, their tail is weak, and their fielding isn't impressive. Does that stop them from winning spectacularly? Of course not”. This recent quote from Andy Zaltzman describes best the home game for Concordia (playing for the 10th time in the season and) against table toppers HBS.

It was the home team’s turn to show who plays like Neruppu Da. This wasn’t due to shaky batting display, but due to one fiercely stubborn partnership, followed by bowling and fielding of good standards. 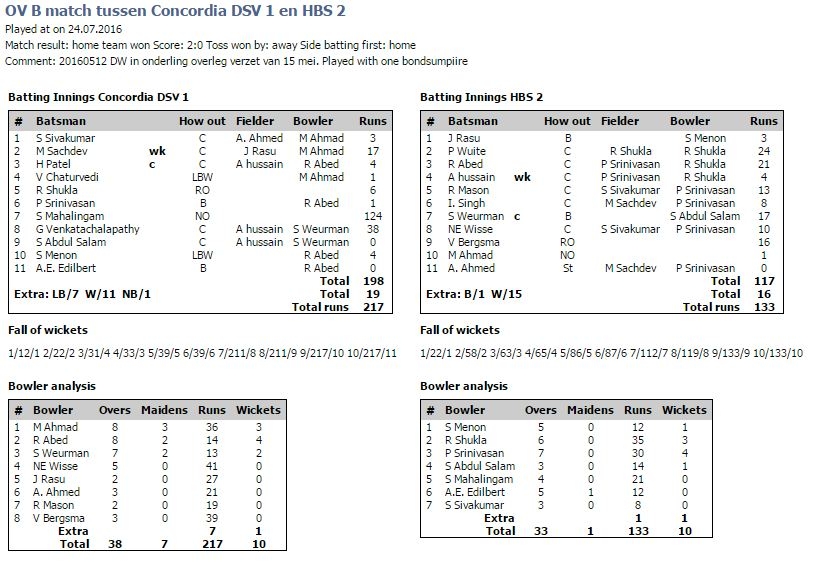 It comes as no surprise that yet again, our beloved captain lost the toss. The new opening partnership of Manu and Srisai batted ably and countered the swing threat of N. Ahmad. This lasted a grand total of 4 overs. Manu made the most of these overs, dispatching the bowlers to both sides of the wicket. With Christmas still a few months away and in a mood to offer gifts, Srisai gift-wrapped his wicket and even ensured a safe delivery to mid-on. Desperately wanting to repay the gift, Wisse offered some help-yourselves kinda bowling and Manu was in no mood to decline the offer and was dismissive with the 4 boundaries he scored. Tiggy, at the other end, was watchful and steady. With 2 overs of no gifts exchanges, Manu, on 17, got into the act and offered his wicket to covers. Ahmad being the beneficiary again. Vikram walked in and soon became the latest addition to the unsolicited gift givers club. Trying to launch a full delivery, he was struck on the toes. The umpire had no hesitation in raising his finger and he did it with such alacrity, that it signaled he was a giver (this becomes important to the plot later). Birthday boy Shukla walked in to some tight bowling and watchful batting. This meant the score stayed between 31 to 39 during the overs from 5 to 14. In the meanwhile, Tiggy was given out for making contact with broad day light than the ball. Probably the umpire wanted to join the gift givers club. As the dust around this was settling in and Srini mama went into bat, birthday boy played the most handsome of strokes, a straight drive. It was truly a sight to behold. Just as the home team enjoyed the drive, Shukla felt the need to exchange ends while Srinivasan tapped the ball not far from the stumps. While Srini didn’t share his enthusiasm for exchanging ends, Shukla was left stranded and was caught half a pitch short on his run out. Feeling guilty for the run out, Srini sacrificed his own wicket when Abed bowled a straight ball, that seem to have hurried him in defense. The home team were in a familiar situation at 48/6 after 15 overs, when the soon-to-be heroes joined each other in the middle. Taking the first few balls on its merit, Sid and Girish did what the top order collectively failed to do: spend time in the middle. Slowly they started to show their full range of strokes. Sid, in particular, was increasingly severe. One poor chap decided to bowl leg spin and came to repent it 3 overs and 39 runs later. Girish, on the other hand, was battling not only the bowling, but also sciatica. This did little to dent his resolve. The perfect fire and ice duel asserted the dominance on the game and was in total control in the middle. There were many sixes of the blade of Sid, but the best ones were a pull to long leg, slog to cow and 3 mighty straight hits. With no control or gifts in sight, HBS succumbed to their firepower and soon Sid reached his century. The partnership ran its course as Sid was out caught while Girish was unable to move because of his back problem. This brought the specialist Sajju to the crease. He made full blooded contact with the ground. The umpire, using complex calculus, inferred that earth is round, all balls are round, hence earth is a ball, Sajju touched the ball, and hence is out. I was at the boundary, administering Girish with much needed stretches, clearly saw a gap between bat and ball. Soon Srijit and Antony followed suit. So of the 217 runs scored finally, 210 were from the bat, with 186 from 1 partnership. The rest of the team heroically contributed 30 runs. Our batting was full of climactic batting collapse, heroic anti-collapse, then an anti-climactic collapse.

Buoyed by the spectacular batting and the fabulous home lunch, the bowling was off the now usual frugal start. A Srijit and slightly tired Sid bowled an incisive spell. Their openers never really got going. It took a splendid ball from Srijit to get the first wicket. Bowling from over the stumps to the right handed Rassu, the ball seem to be headed down, wide of the pads. But all of a sudden, the ball swung out (actually in) and too out the leg stump. For those who felt confused about the above sentence, spare a thought for Rassu who was on the receiving end this delivery. In walked one of the 2 vertically well-endowed batsmen. His intentions were loud and very clear. Send the ball to mars. Birthday boy catching wind of this, courageously tossed the ball up, as any attacking spinner would do. The trap was set and the combo of B: Shukla C: Srinivasan made its way to the scorecard. Twice. In quick succession. There was so much excitement during the second catch that Sajju couldn’t contain his excitement J. At the other end, Antony was bowling his usual hostile spell of bowling that we’ve come to expect from him. He was bowling with pace, bounce, control and swing. His whole spell was just too good to get an edge. Incomes the 5th bowler, Srini mama, who, with a sly sense of humour, takes 5 wickets. The guile was too much for the HBS batsmen to handle. There were 2 catches dropped of Srini, one each at slip and long-off. But still he ended up with 5 wickets. His figures should have been 13/5 in 7 overs, but one Mr. Weurman, had other ideas. He helped have the non-aerospace engineers a crash course in projectile and sub-orbital mechanics, by launching 2 super massive 6’s. Sure, the ball got a bit hot during its stratospheric reentry. Lucky we got the ball back. Riding high on the lusty blows ,a confident Weurman tried the same of Sajju, only to find the walk to his middle stump signaling his walk back to the pavilion. While he was around, the WASP predictor still had a 5% chance of HBS victory. After his wicket, the win probability went to lol. The customary last wicket was taken by Srini, smartly stumped by Manu.

The game was memorable for many obvious reasons, but there are some hidden (statistical among other) gems that caught the attention:

- The conscious effort to maintain the ball nice and shiny paid off. The ball was swinging till the very end. Good job boys

- The average of the top 6 batsmen was a spectacular 5.33. This number is so high largely due to Manu’s 17.

- Our fielding wasn’t tested as much as the yester-games, but we still dropped 2 of the 6 catches. Might need to do more fielding drills. We stand at 2:1 caught-dropped ratio.

- We missed possible run out. Part of the reason for the miss was multiple players calling for the fielder to throw to either ends. This generally doesn’t help. Perhaps its best the keeper does the calling.

- Having a birthday on match day helps.

- The pitchers after the game helps even more J

We are still behind table toppers HBS by the narrowest of margins. We have a few games to make this difference favourable. But a full strength HBS could easily steamroll many teams in the league. So we need to be on top of our game for the remainder of the season. HBS’ bowling was not threatening, but needed temperament from the batsmen. Out bowling is a real threat, needing lots of technique, in addition to temperament from opposition batsmen. We have a real winning edge. All we need to do is use it.