Menu
Title: The win of the Crooks
Concordia under the leadership of Dada, the great elected to bat and put up a formidable total of 249 in 40 overs with splendid performance from Hari, Sajjad and combined effort by the rest. Unfortunately, as the superstitious cricketers would say that the PCC ground is not in favour of Concordians, where the veterans have already practised not only the art of slogging, sledging but also cheating. With these characteristics combined with a non-disciplined effort from the Concordians, the home team  took away the game  from Concordians 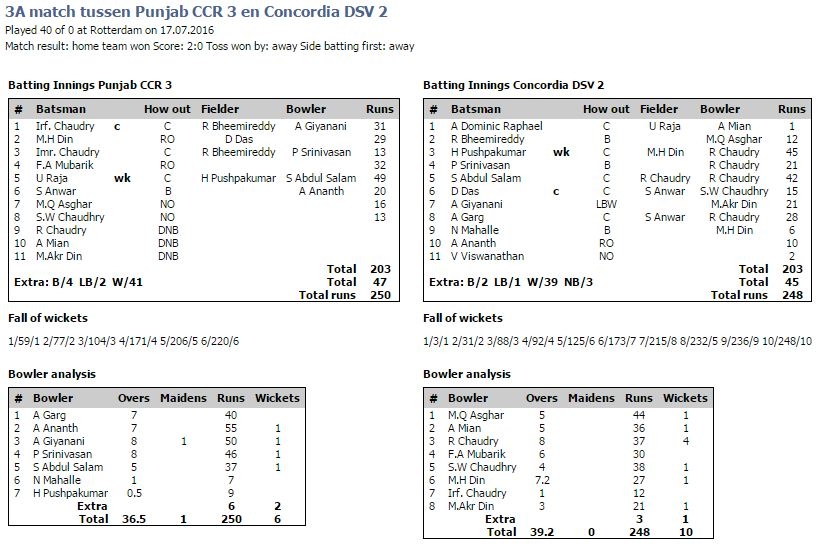 Concordia Innings:
There could be no better day in the Netherlands to play cricket, with the sun playing hide and seek along with clouds, temperature  ranging around 20 degrees. Arun and Rajeev went to open as usual, while Arun fell early to a rising ball and Rajeev getting bowled after a good start. Hari started off from where he had left and looked dangerous from the beginning of the innings, striking well and disappearing two balls outside the ground. Prashant on the other end took some time to get used to the conditions and looked good on occasions when he drived the ball splendidly. Hari after a blasting 45 couldn't clear the boundary and fell short of a 50 this time. Prashant did not stay much longer either, which brought Sajjad and Dada at the crease. Sajjad started off well and scored briskly while Dada did the anchoring job, although with a good batting line-up behind. Soon, Dada couldn't resist the heat was caught for 15 runs, when the scoreboard read 125/5 after 20 overs. Ashim and Sajjad played well to score 6 rpo with ocassional boundaries and quick running between the wickets. Punjab then brought a jindra bowler to break the partnership and Ashim was deemed lbw of a jindra ball, that Hari claims to be the most jindra ball he ever saw. This exposed the tail a bit and didn't allow the tail to lash out at the Punjab 3 bowlers. The carefulness of Sajjad combined with some good shots from Aayush led to another 40 runs partnership, ended when Aayush tried to hold back his shot only to be caught at covers for 27 runs. With only 5 overs left and still 4 batsmen to come, Sajjad determined to accelerate, he tried to play a weird shot ending into a caught and bowled for a well made 45. Aditya, Nakul and Vidvath carried out the last overs well and could manage some healthy runs in the end, just getting out in the last over in the need of runs. R. Choudary ended his spell of off-cutters and leg cutters with a 4 wicket haul, giving away just 37 runs in 8 overs. A bit of application and adjustment to the ground, keeping wickets in hand would had led to another 30 runs easily. Even though the score was enough, keeping the ground in mind and the crooked nature of Punjab 3, it was an achievable target if wickets were not taken at regular intervals.
Punjab innings
The Punjab innings started with thunders of boundaries as H. Choudary scored briskly hitting the opening bowlers for quite some runs. This was accompanied by quite a few wides from Aayush, unable to control his line and length and under tremendous pressure, decided to take a break. Aditya had to come into the attack and at the same time, the opening batsmen was caught at long on with a well executed plan of a slower ball by Ashim and Rajeev. The scoreboard read 59/1 after 9 overs. After this, the second opener also followed suit and got run-out with some splendid fielding from Sajjad at 77/2. Aayush was given the ball again for a well deserved comeback and he bowled some tight deliveries to restrict the runs at the same time some wides, enough to allow the batsmen to settle. Prashant was brought under attack and took the third wicket, where the score was 104/3, sending some shock waves into the dressing room. At this stage, Punjab made a smart move to send in a left handed batsmen (U Raja) and it would have been interesting to bring in Nakul at this moment into action. However, the batsmen got used to the pace and turn of Prashant and played him out with sweeps, padding the balls missed during the sweep. The short boundaries helped the batsmen with the sweeps, the lbw and stumping appeals were neglected leading to some frustration in the team. There were some crucial occasions in this spell where both the batsmen were dropped. Additionally, a big nick to the keeper was denied and arrogantly ignored by the umpire, summed by another 2m short run-out denied by the same Umpire again. It could be argued that this broke the rhythm of the players and we with a better game plan, better technique and fair play were looking like fools in front of street smart Punjab guys, who celebrated their better position in the game through cheating. F. Mubarak who had consistently swept Prashant was run-out  when the score read 171 and the partnership was broken. U Raja nicked again off Sajjad and luckily this time,the umpire from other end declared him out. In the final overs, the batting team smashed the nervous bowlers into gaps knowing their ground very well and they won the game with 2 overs to spare and 6 wickets down.
Highlights
The hope still exists to make it to the 2A league. The hope that Truth triumphs the False and fairplay is rewarded.
--Ashim
Match Reports 2016 Overzicht
Tweet